While only an occasional blogger at best, this has been quite a hiatus for me: it’s been a year since my last post here. In addition to work with facilitation and coaching clients, and a concerted effort to make progress on my doctoral studies, there were several months of working as a volunteer with Marianne Williamson’s presidential campaign (here’s a Medium post I wrote during that time), and also becoming active with Extinction Rebellion, sometimes referred to by democracy geeks as the “deliberative rebellion”.

And then, the pandemic happened. We are now in the midst of the enormous social upheaval of the Corona crisis, with all of its various public health, economic, social and political dimensions taking place around the world. So many tragedies, so much suffering, so many losses… and also, so much heroism, so much kindness, so much creativity…  and so much uncertainty still, filled with potential and dangers both, regarding what the world will look like, when we come out the other side.

Yet the intention here is not to offer my thinking on the macro situation, but instead, based on my work as designer and host of conversational spaces for group learning, to focus on this as atime to spark, convene, and facilitate conversations on the much-needed topic of what we want the “new normal” to be. I’ll start with a link to some excellent resources; now that we are having to shift from face-to-face meetings or workshops to a virtual environment, online facilitation expert Nancy White and friends have responded by catalyzing an awesome information-sharing and support community for consultants and group facilitators in this transition.

One of the first conversations I facilitated about the Corona crisis took place in Munich in early March, while we were still having face-to-face gatherings.  I had just finished leading a three-day “Deep Dive on Dynamic Facilitation” with Matthias zur Bonsen and Holger Scholz outside of Bonn; afterward I had been invited to Munich to visit with the Dynamic Facilitation e.V., a new non-profit association formed to support the spread of this collaborative sense-making methodology.

At the time, while not realizing yet how quickly this trip to Europe was about to be cut short, we were already avoiding hugs and handshakes and worriedly monitoring daily news. That evening, we heard a lot of concerns from the participants who joined us. The first few schools in Munich were just starting to close (this was still ahead of the government-ordered shut-down which came later) and inconsistencies in their policies were creating a lot of confusion for parents. In addition, there were financial worries about what would happen to households that depended on having two incomes to stay afloat. A very concrete proposal was suggested by one participant, that the government should “offer an extra 500 Euros a week to mothers or fathers who have to stay home to take care of children; after all, if we can do it for banks, we can do it for people.”

Yet as the conversation unfolded, other themes were raised, and it soon became apparent how much concern there was about the isolation that was already present in society, and how this crisis could make that worse: “Lack of touch is already a problem: what will happen to our society if we have yet another reason to avoid contact with each other?”  In turn, this isolation made it much harder to consider grappling with the unavoidable existential themes of vulnerability, sickness, and death. 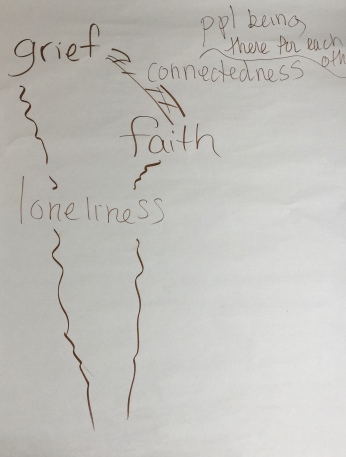 One particularly poignant contribution led to the image on the left: a chasm of loneliness, separating our grief from the possibility of faith — faith in life, faith in human goodness, faith in the meaning of existence, faith in whatever it is that keeps us going…

And then, only after those first three elements had been drawn, the bridge of human connection appeared; to the degree that we can trust that people will be there for us, a bridge is created that can lead us from grief to faith.

That memorable evening left its mark on all of us. What I did not realize then, is how rapidly events would continue to unfold, and that this would be one of the last times I would be offering Dynamic Facilitation in a face-to-face gathering, at least for a good long while.

After a brief overnight stay in Nüremberg, and a lovely encounter with a handful of dedicated XR activists there, I took the train to London. Soon enough, it became apparent that the two DF workshops there would need to be cancelled, along with various evening gatherings that had been scheduled.  Instead, I would be flying home to quarantine myself for two weeks, in case I had picked up the virus during my travels despite my best precautions. By the time my self-quarantine was over, much of the world was under stay-home orders.

That is, those of us lucky enough to have a home to stay in. It’s been horrifying to watch this world-wide train wreck unfold, affecting disproportionately those who are already suffering from enormous disadvantages. At the same time, it has been inspiring to learn about large numbers of activists who are responding by organizing mutual-aid networks. There is much more of this kind of work taking place, than what has been shown on the daily news…

Also inspiring are the many rich conversations emerging online, many different communities of practice gathering together for connection, as we help one another make sense of these times… I have chosen to participate in some of very meaningful  Art of Hosting gatherings regularly taking place online (thank you, Mira Bangel, for the original call… and to everyone who has responded…) and, so much more is also taking place! Announcements for online World Cafés and Open Spaces and Visioning Gatherings have blipped across my radar, warming my heart just to know that they’re happening… and, as much as possible, I’ve been focusing on that which has been mine to do, that which I am now celebrating here, amidst all the tragedy and mourning: the birth of “online DF”.

After returning to Massachusetts from London, some of the pro-bono workshops and gatherings I’d cancelled became immediate opportunities to plunge into the unknown. Yes, of course I was willing to offer something online instead, especially in this unprecedented situation. No, of course it would not be the same, and yet, the circumstances were and are calling all of us, to do things we have not done before…

Truth is, I had engaged in a few experiments with doing Dynamic Facilitation online over the years. (Thank you, Edwin Rutsch!) And of course I had seen this as our next learning edge, something which we would need to get to, eventually….

Yet “someday” unexpectedly became “right NOW”, and very soon there were a handful of new experiences to share with others. In a brief span of time, Kristina Henry, Astrid Köeppel, Markus Goetsch and I sent out an invitation to a small list of DF teachers and practitioners, to attend a three-part series called “Prototyping the Online DF Experience“. Within the first 24 hours, half of the seats were filled; another 24 hours later, we had a full house.

Two days ago, we held the third and final session of this workshop. (If you are curious, here is the harvest from session #2.) The feedback from participants has been extremely encouraging…and here is a screenshot from the end of session three (thank you, Andy Paice!)

So that was Tuesday… and then on Wednesday,  several of us had the opportunity to come together again, as part of an online gathering for Dynamic Facilitation teachers and emerging teachers organized by the e. V., the new nonprofit association based in Munich mentioned earlier. We had the honor of being joined online by Jim Rough, the original founder of this work, as well as Rita Trattnigg, Wisdom Council facilitator extraordinaire who has been sorely missed…  and it was a great pleasure to work alongside Wolfgang Fiebig and Tanja Schnetzer, two founding members of the e. V., as part of the hosting team. To my knowledge, this is only the second time our community of teachers has had a virtual gathering like this; the first one, much smaller, was back in 2015. So all in all, this has been an extremely fulfilling week!

If you have managed to read this far, it’s likely that you may have been to a DF workshop at some time in the past, or that you know me personally in some other way. Thus, you might be able to imagine how meaningful this has been… nine years after my first trip to Germany, Austria, and Switzerland, to meet new colleagues in the places where this practice has been spreading… and twenty years after I was first introduced to this work, in the year 2000.

Sometimes I ask myself, why have things taken so long?? who knows…  yet what matters is, here we are today, poised on the edge of the unknown…  and we’ve all been preparing ourselves for this present moment, for a long, long time.

your thoughts and comments welcome, below…